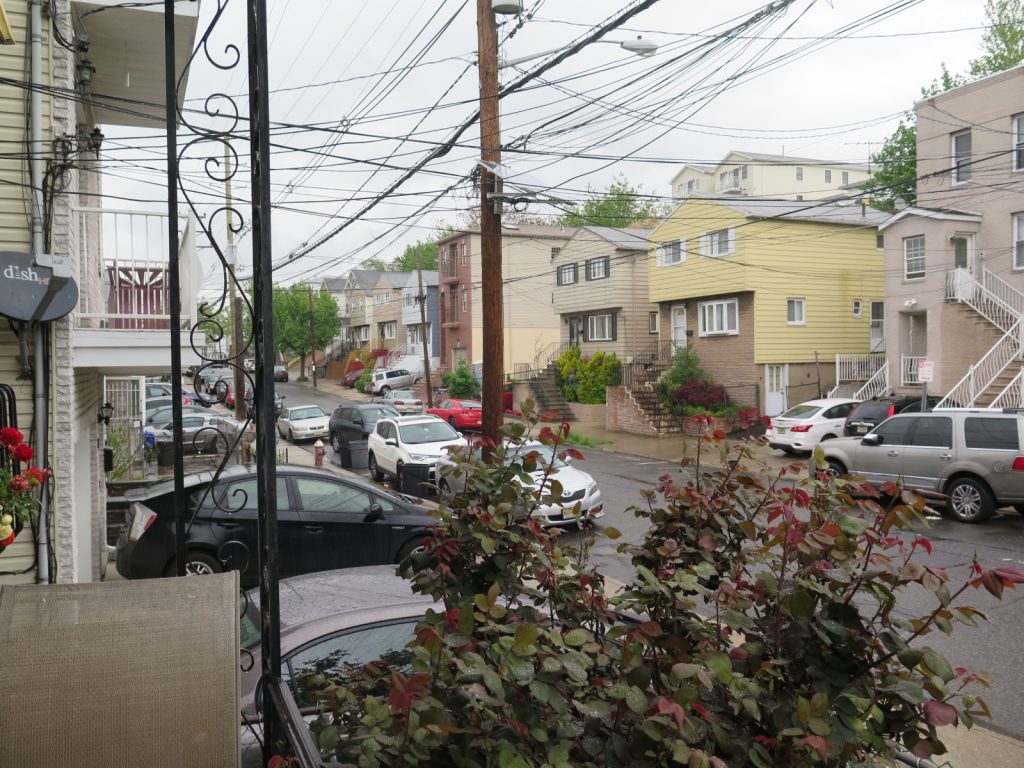 It came down pretty much all day yesterday. I was up and sitting out on the stoop at 5 AM… attempting to blog but thought the better of it as the wind was blowing the rain on to me and the tablet. I came back in and Kurt was up with his bowl of cereal. He was getting ready to head into the city for work… the first day back at work after a week and a half of shooting both in Detroit and here in Jersey City.

For the most part Xan, Tommy and I lounged around chatting and watching a couple of episodes of Sense8. Since it was raining pretty hard outside even my daily walk was not an option. Not that any of us were up to much in terms of physical movement anyway. I’ll confess I thought I was the only one feeling this way… then everyone piped up that they were feeling the same A collective fatigue from the shoot probably and not so much the ravages of age in my case. (And before you start mocking me… I did write, “not so much”) 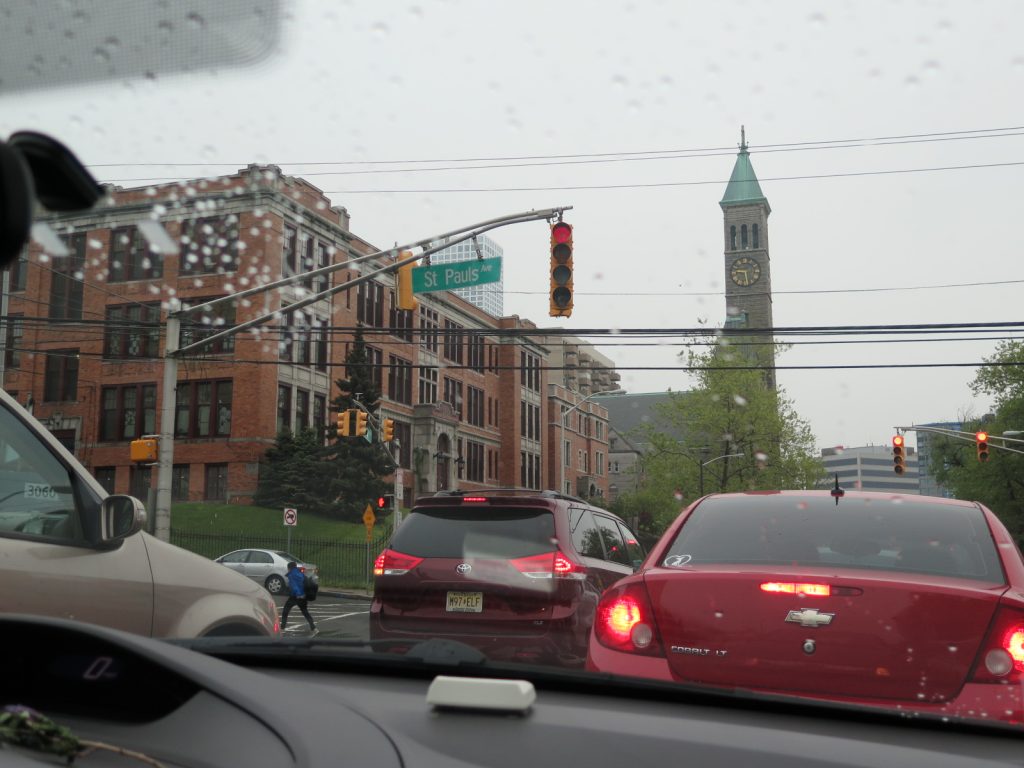 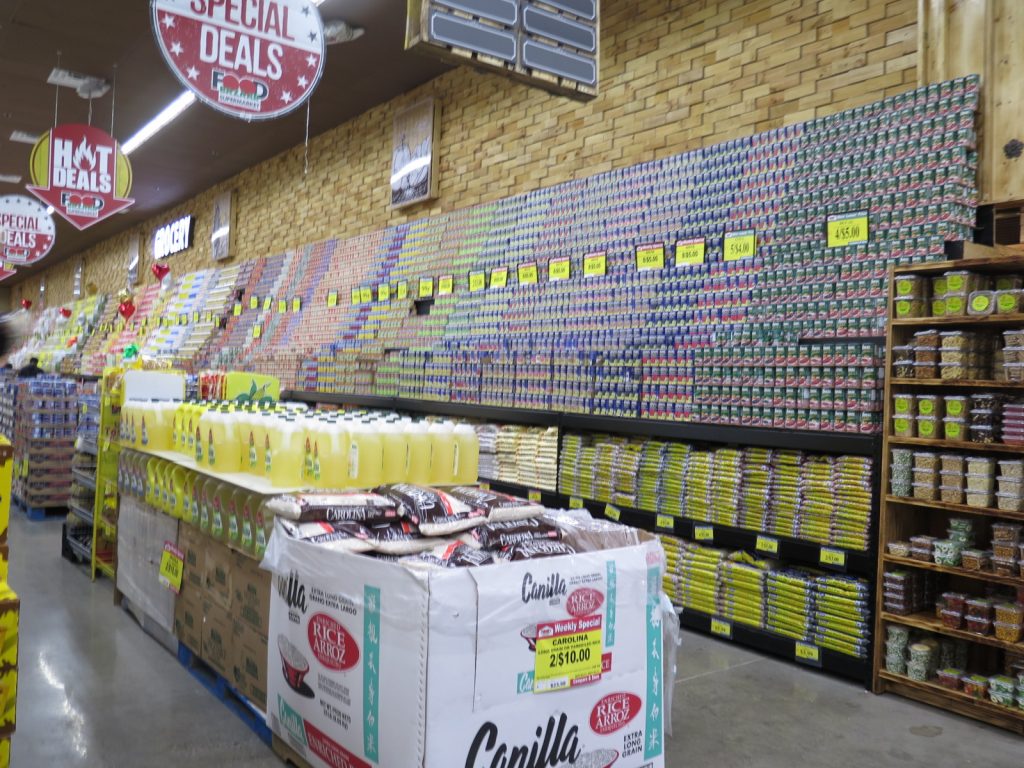 Around 4 PM Xan and I dropped Tommy off so he could catch rail transport back into the city. We then headed to  Food Bazaar to  get some fixins for an evening’s Cinco De Mayo meal.

I was here once again…  the place I experienced the “moment” from the night before. Admittedly, to most it would not have been a moment… but to me it was. So, now let me attempt to articulate what I didn’t in yesterday’s post.

First, let me state that I have no regrets about how I have lived my life so far. In life, at different periods, shifts occur. Some dictated by choice… some by circumstance. Priorities change and our mode of operation, as it were, follows accordingly… or at least it should… or eventually will. The current reset is a choice  and the process has been ongoing for a few months now. So, yes… this is an attempt at a change in my own mode of operation.

With this trip and being away from the homestead has cleared the air and brought along a certain clarity as to what was. As a friend was fond of saying, “Locate the kink in the line… and only then can you attempt to un-knot it.” For instance, there was a time I found myself waiting. “A time will come…” or “When this (insert circumstance here) is over I can…” So, not capitulating to those justifications while putting life on hold is one of the shifts  that has been ongoing for me for a while now.

Another is the notion that everything has to be planned. My work involves a lot of that… and that night outside the market the clarity of that became really quite vivid. I realized that was bleeding more and more into ‘non-work life.’ Not that everything is going to  be just willy nilly now… but there has to be a balance between the two… especially if one wants to live life more fully.

Yes, life is messy but one has to allow for some of that. This blog, for instance is rife with misspellings, etc. I’ve gone back and corrected some… but for the most part I’ve allowed them without instantly editing… correcting… as I’m writing to allow for a freer flow. I didn’t used to do that. Even the thrust of the each post has not been designed… but merely just allowed to happen. I’ll cop to the fact that the earlier posts were a little more thought through than say… the last five or so. To me the earlier ones feel a little stilted. Not that the posts that followed were brilliant… the point being they were allowed to happen.

Really, the only times when one should plan for “moments” to occur is when one is creating (in my case) theatre. All other moments should be experienced in it’s randomness. Planning moments in life either leaves us underwhelmed because it was expected… or leaves us frustrated because the moment was not realized according to plan. So, yes… allowing for spontaneity in my life is a big reset.

The third is re-engagement with those I’m in immediate proximity and contact with. It was on the train ride between California and Chicago that I discovered I still have a capacity for that. I conversed with total strangers… until they became strangers no longer. Perhaps not having an internet connection helped. And franky, not being cyber connected was not something I missed. I have seen too many instances when someone has been in a group of people with the potential of real engagement but their faces aere stuck in a phone… and they miss the moments… or the potential of one.

So… yeah… that’s pretty much it. And what’s more… I think I’m getting to where I want to be. 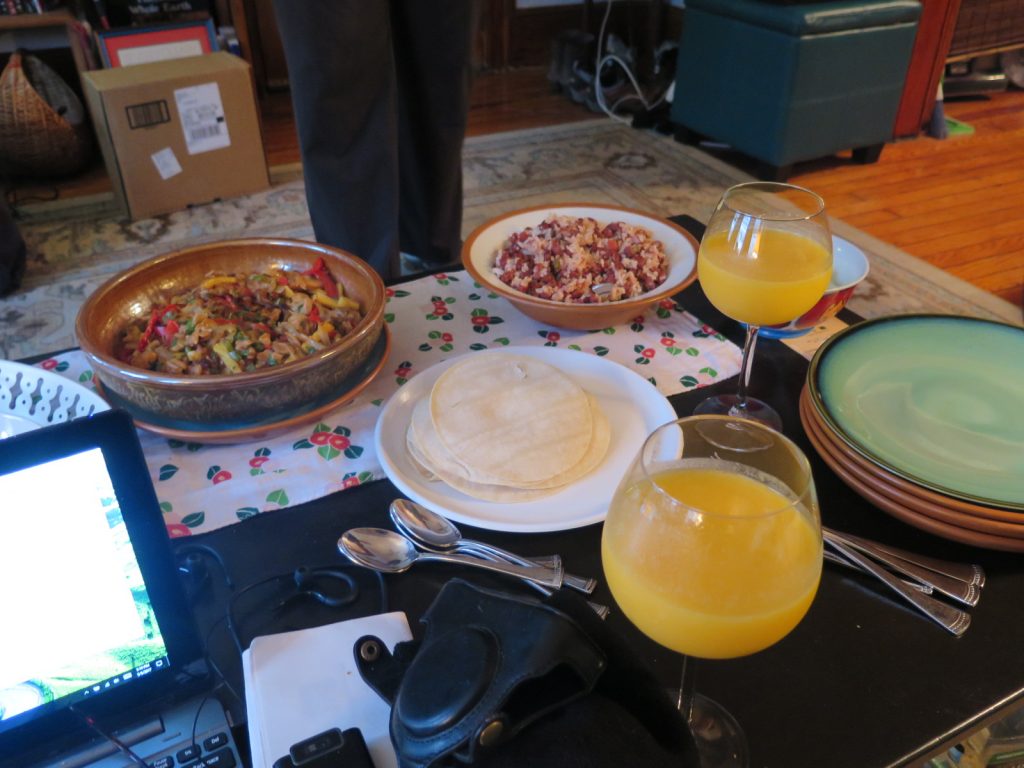 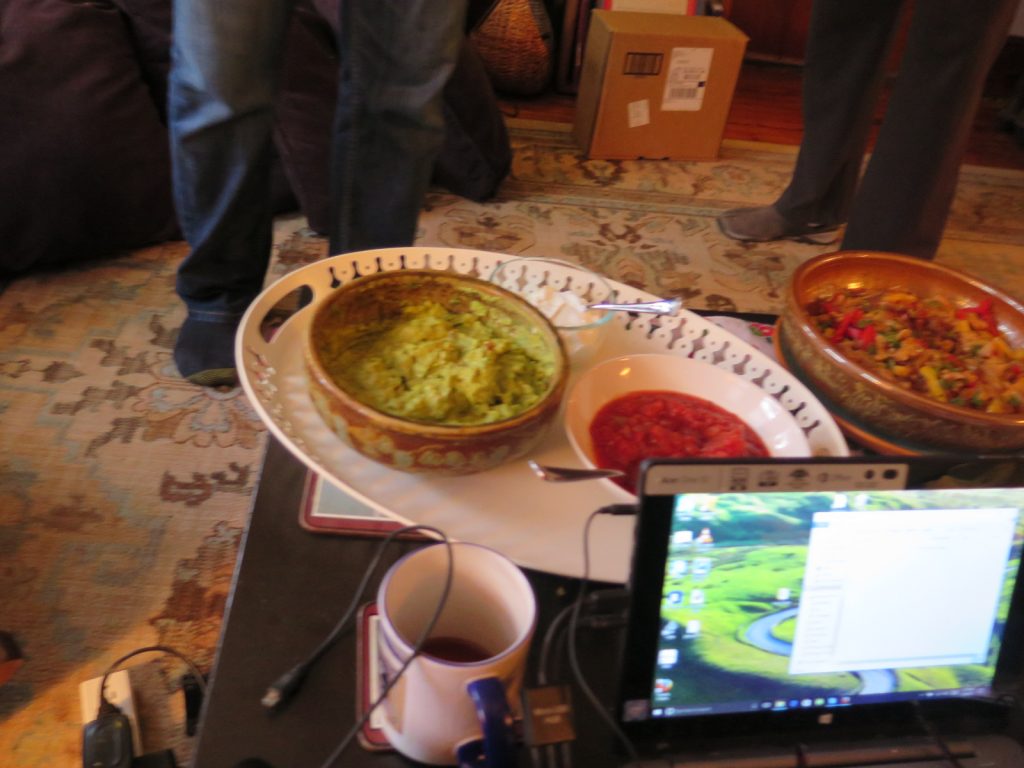 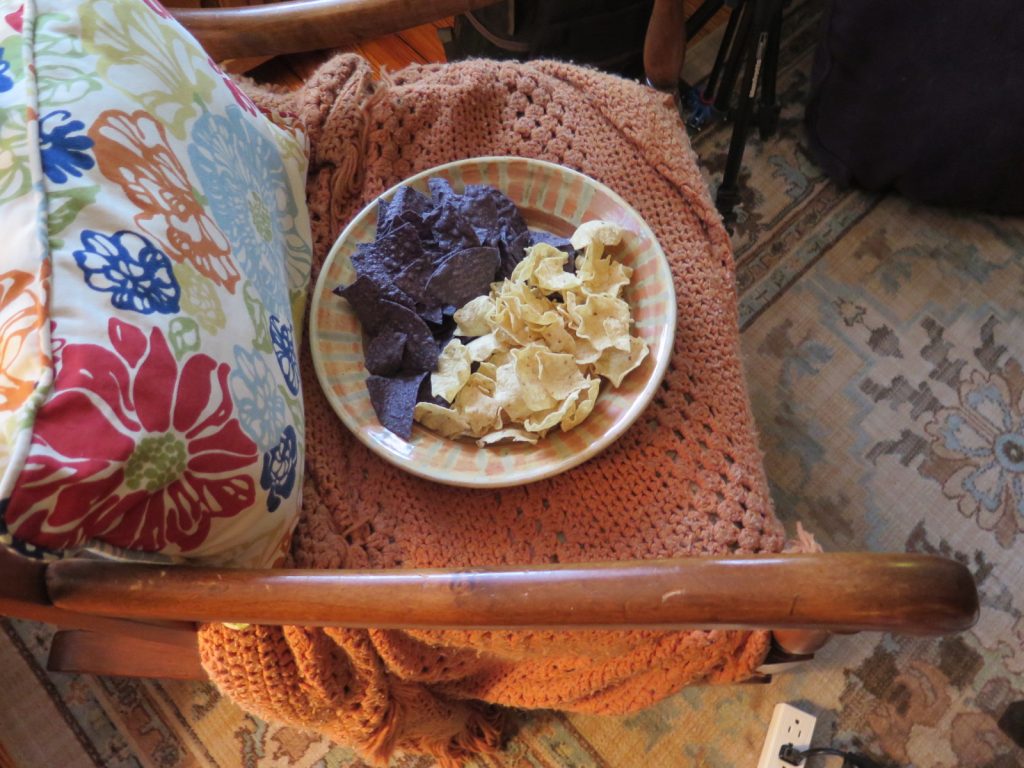 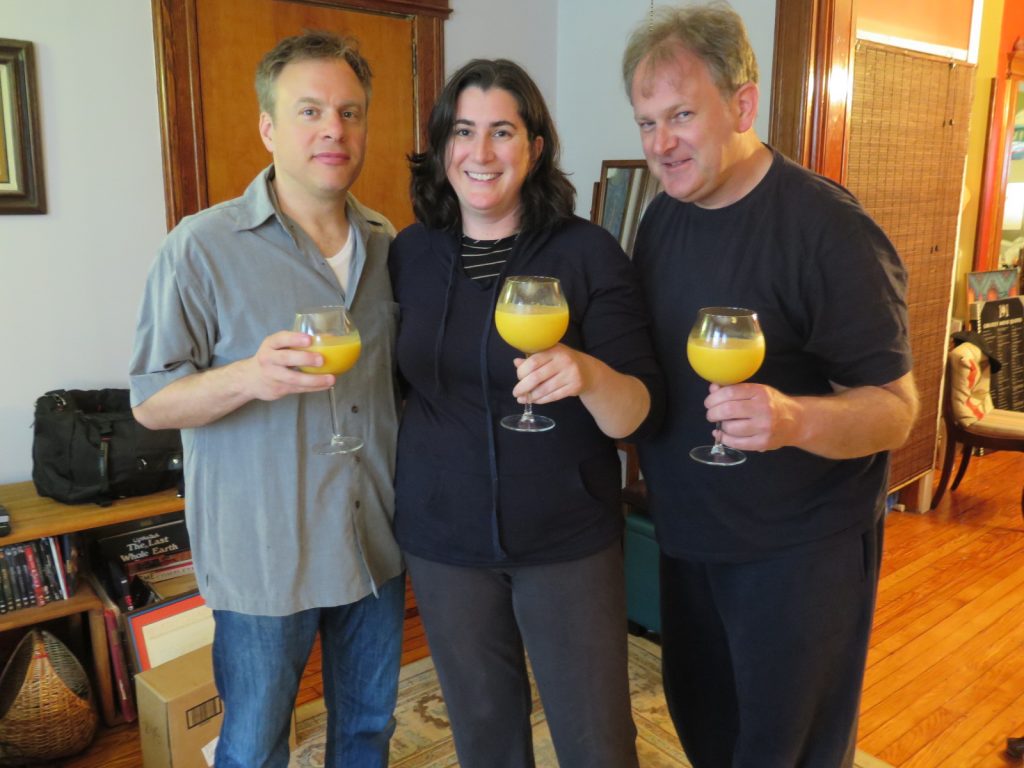 Thee evening’s food, drink and fellowship was nice. It was great sharing it with Kurt, Xan and Kevin (Xan’s brother).  Xan did a grand job with the food and drink. There were even mango margaritas. But the toll of the following week and a half was also felt and we all kinda zonked out by 10 PM… but happy to have done it anyway.

Just to keep in the mindset of this post… I’ll leave you with this.