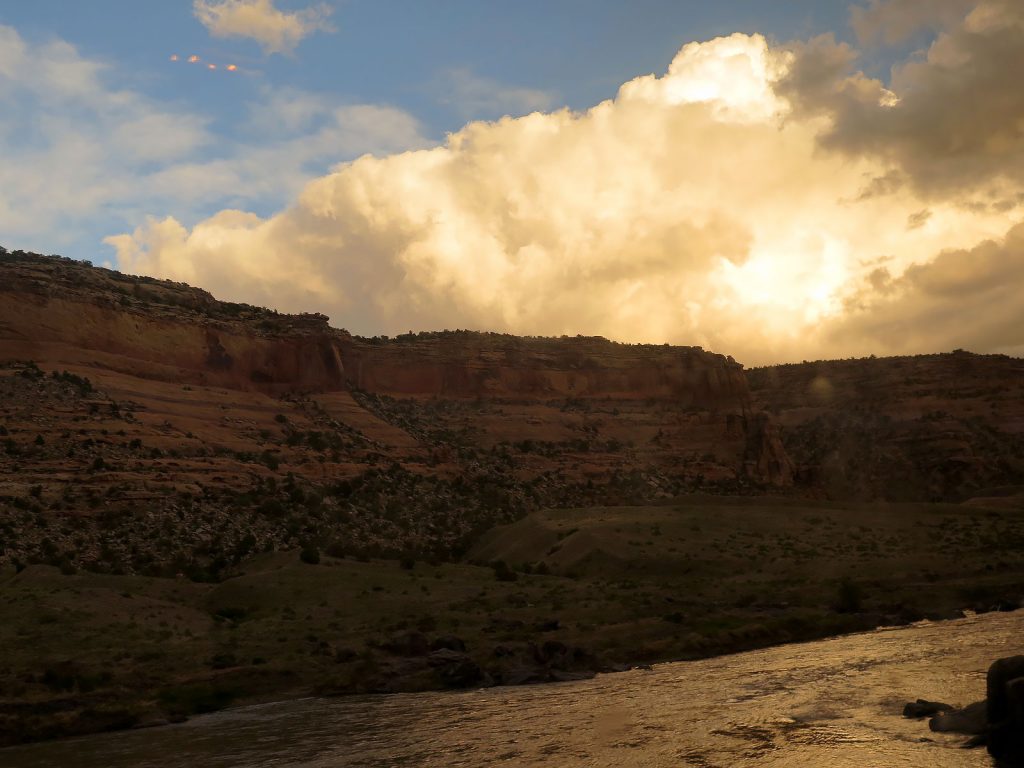 I was half kicking myself for not documenting (at least picture-wise) the last section of the first leg. Now that this stretch was going to be the first section of the sixth leg… I didn’t feel so bad. Yay, for second chances, eh? After I first got to Chicago… with a few exceptions, I made an effort not to revisit or repeat where I had already gone… ensuring that each and every encounter was a new experience. To that end, if I had to return to a location because I was bunking there, I would make sure my excursions were designed as a loop.

Unlike when I first got on in California about a month before, we were given assigned seating this time around. Probably because there were going to be more folk taking the train this time out. My ride mate was Kevin… a college aged young man ( attending Rutgers) who had an obvious travel bug… especially for trains.

So, as the train pulled out of Chicago I made my way into the sight-seeing car and pretty much plonked myself there for most of the trip. For me, it was an opportunity to catch the sights more fully than I did when I was making my way out. 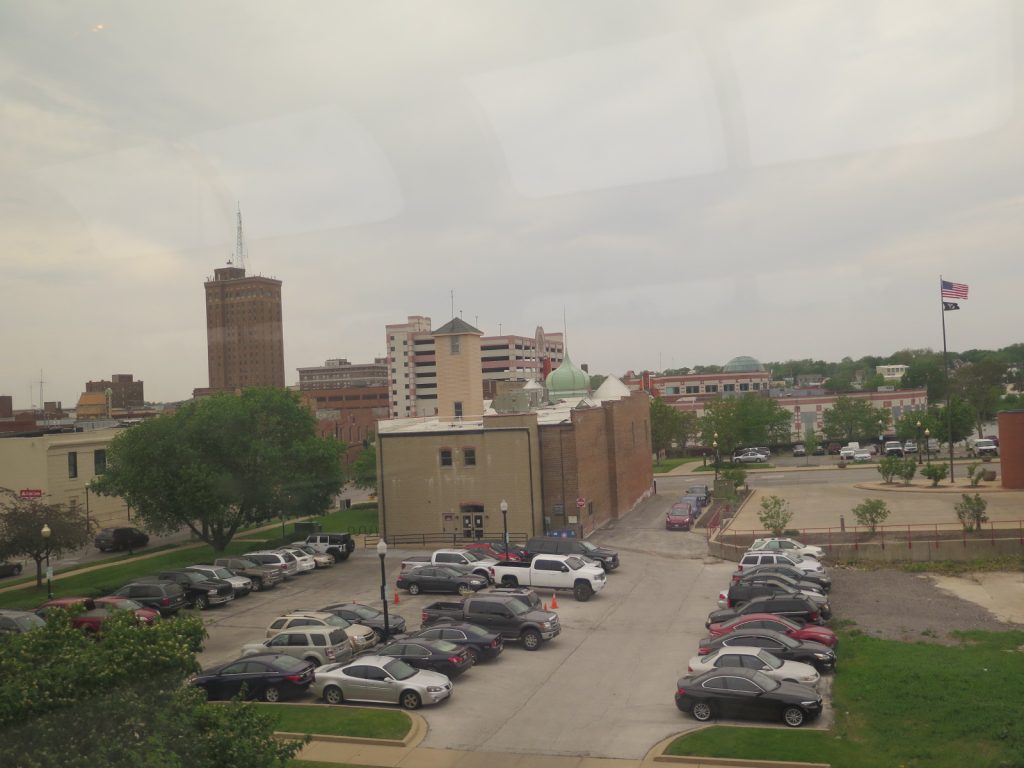 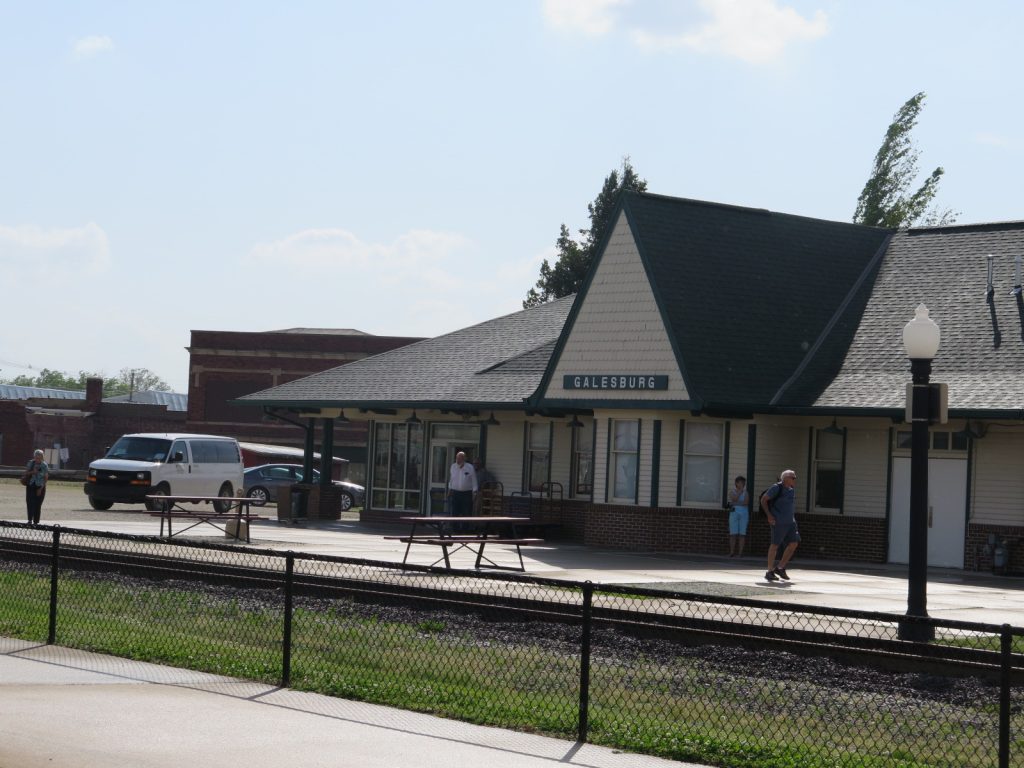 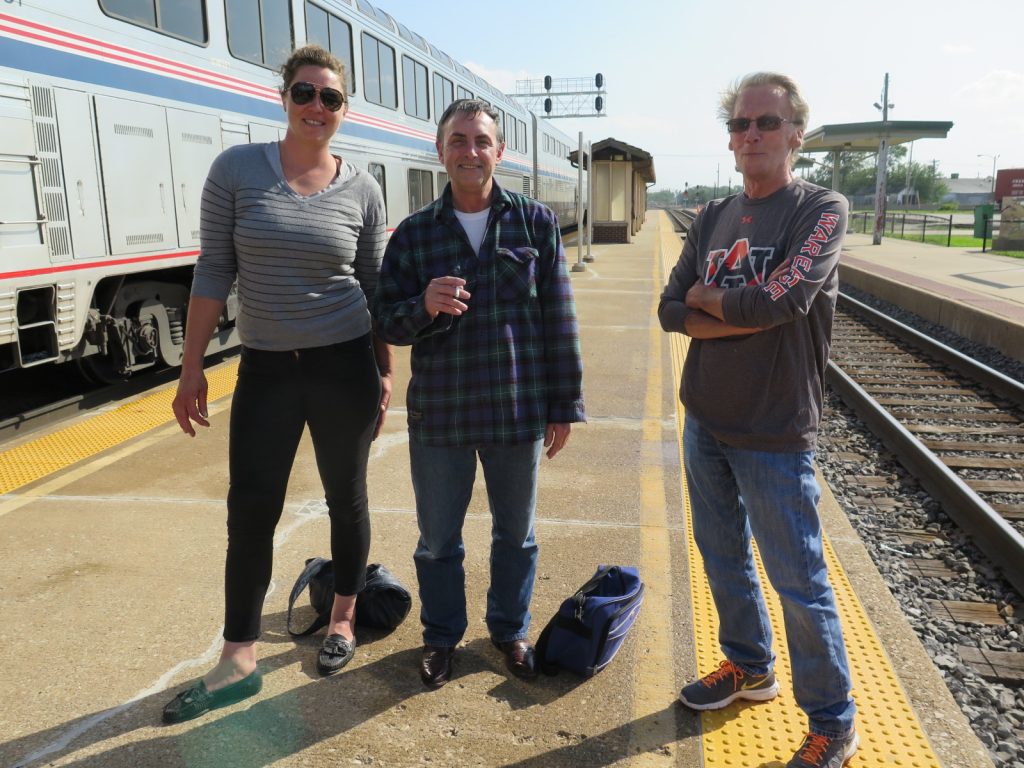 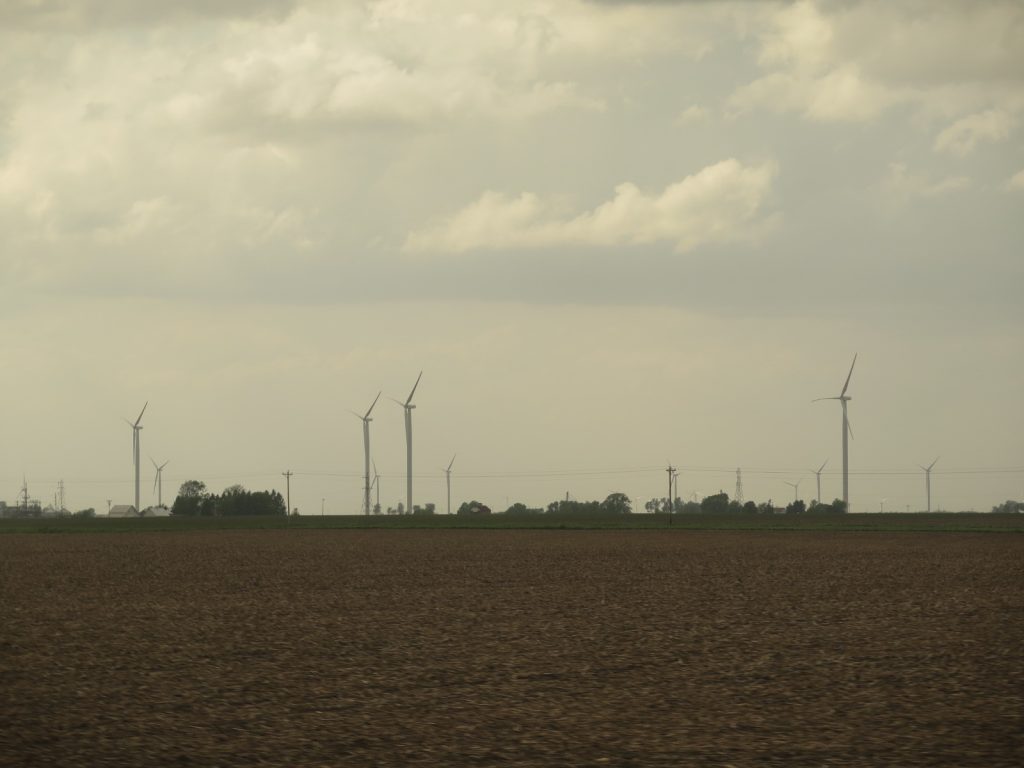 We left Chicago at balmy 87-degree temperature. Just after Galesburg, IL… the weather started to change. We crossed the mighty Mississippi just outside Burlington and the wind started blowing pretty hard. So hard in fact, that the train just stopped… for a good couple of hours.

An announcement came over the train’s PA system explaining that there were 80 mph winds up ahead with tennis ball sized hail – basically, a tornado warning. There was nothing else to do but to grab a beverage from the cafe car and sit this one out. Just as I headed down I heard…

“Yep, they are expecting 6 inches tomorrow. I’m going to my granddaughter’s graduation and it’s supposed to be held outdoors.” said the lady getting herself a gin and tonic. 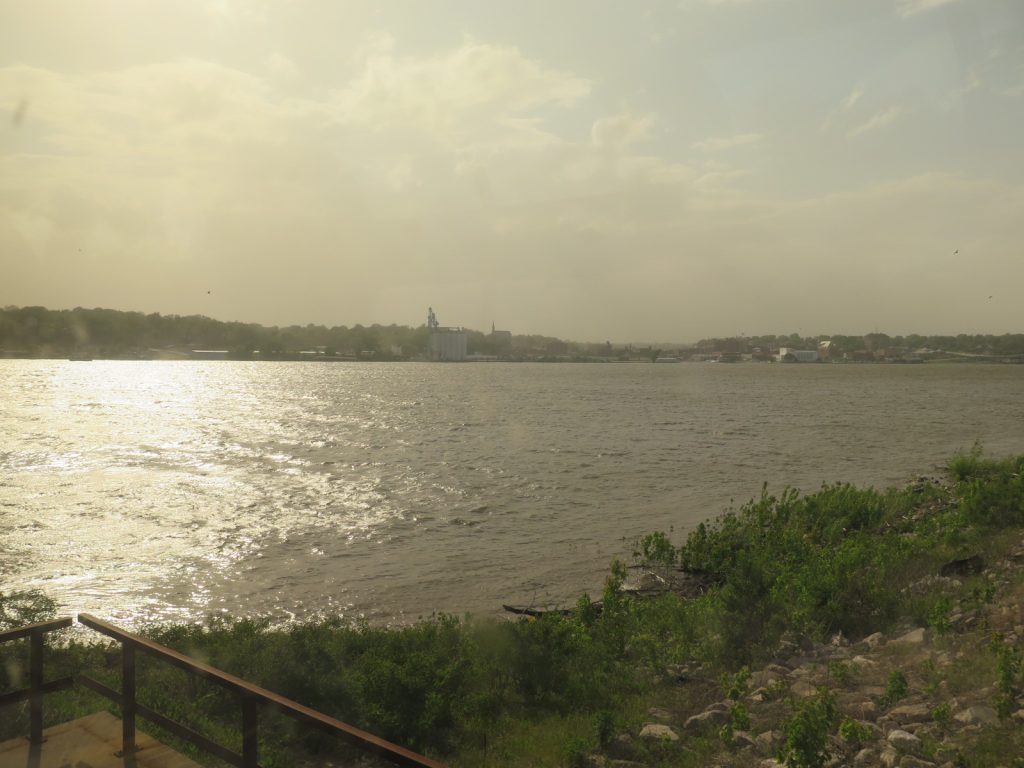 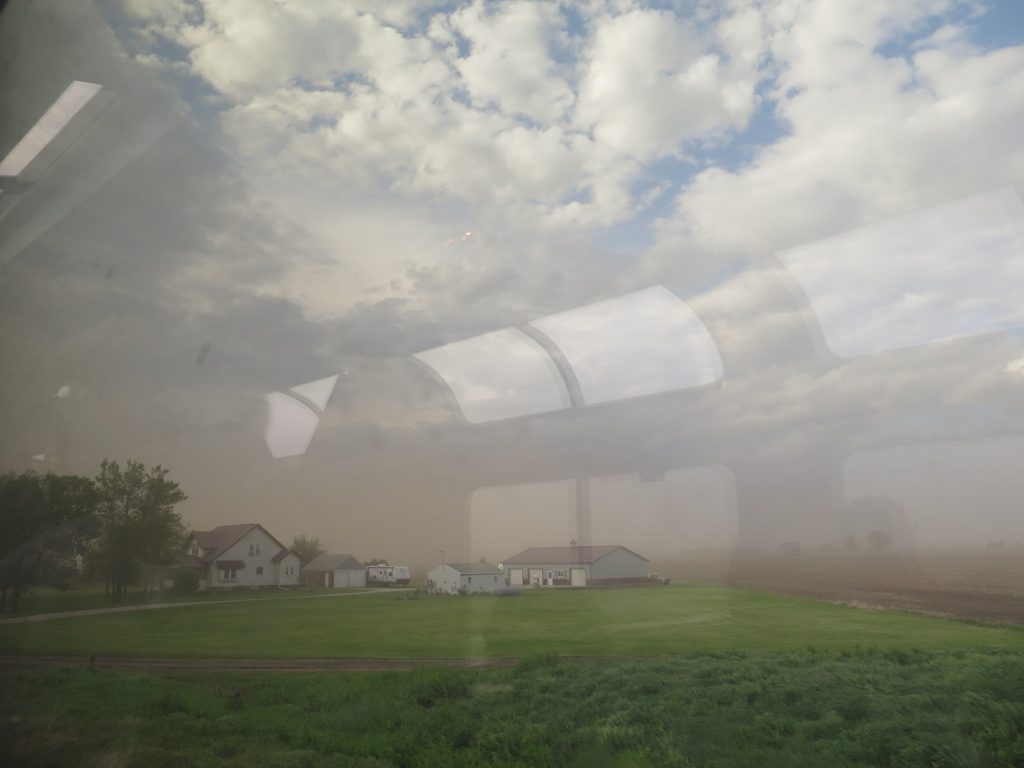 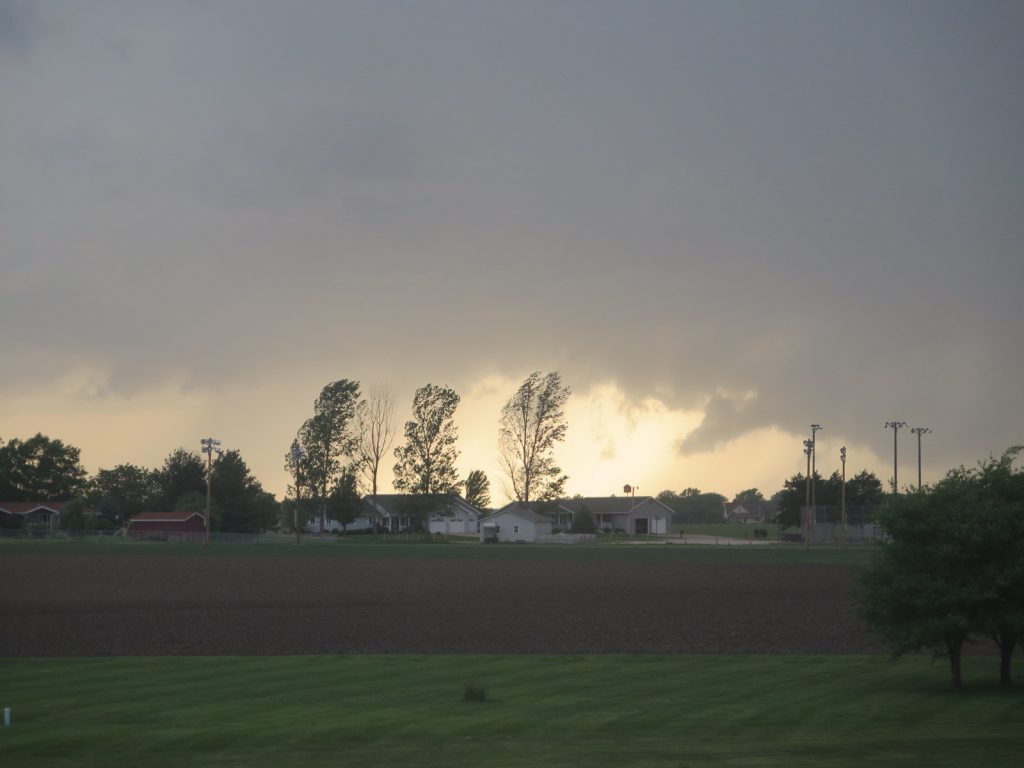 So, we all sat around looking out for “fingers in the sky” as alarms went off with just about every cellphone in the car. We did see a few… but none of them touched the ground.

After a couple of hours the journey resumed. 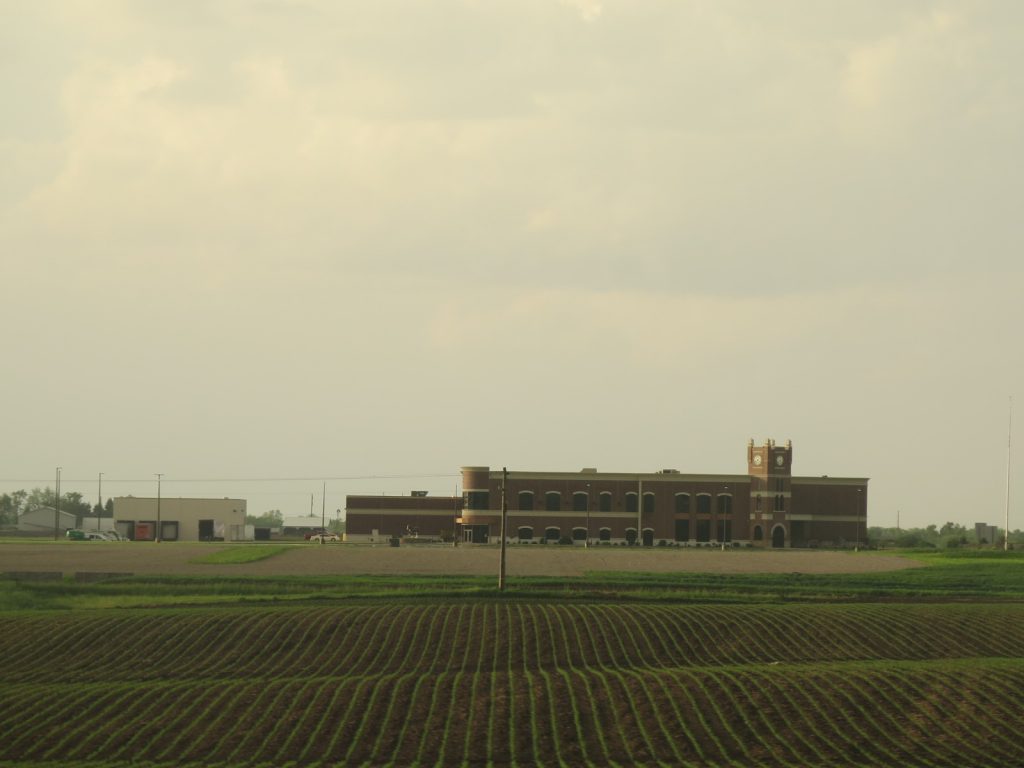 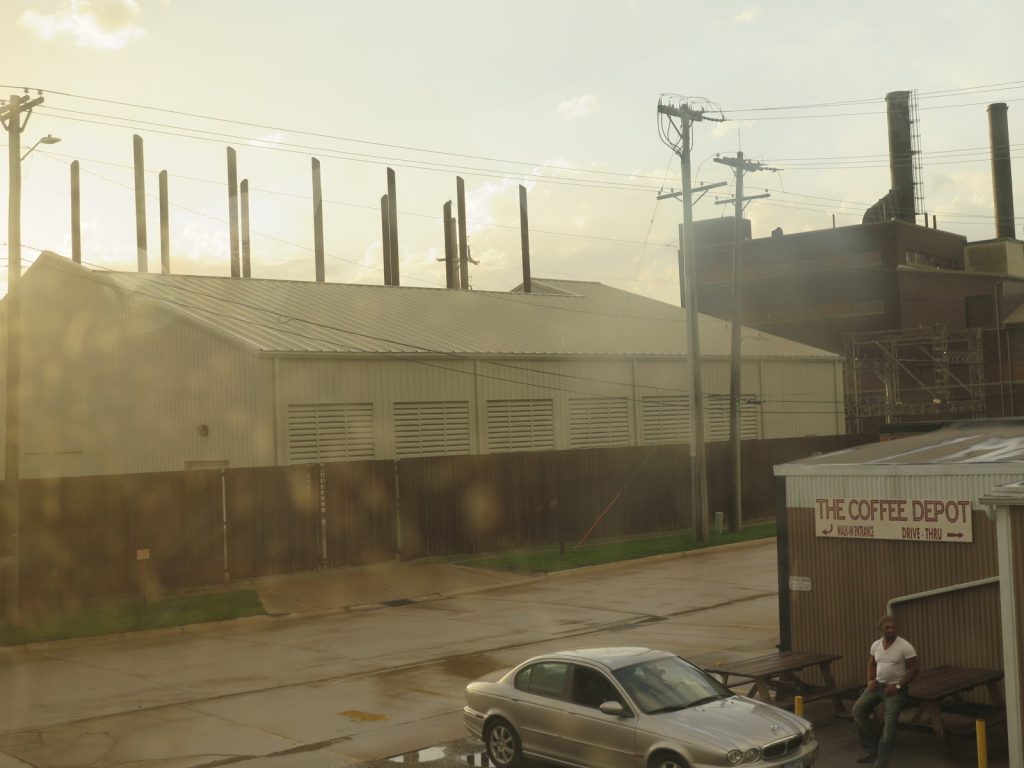 When we get to Denver the train is already 3 hours behind… and it was raining – not snowing… but it was cold – 34 degrees F. Our scheduled 50 minute layover had been cut in half to make up time. I ran into the station and got a roast beef sandwich… more affordable and (sorry, Amtrak) tastier. I was a little disappointed that it wasn’t snowing.

The train pulls out of the station and lo and behold… it starts snowing! Yay! And it is coming down pretty hard too. Mind you this was the middle of May. By the time we are out of Denver on the climb into the Rockies… it’s pretty much a winter wonderland. Not great for vista viewing but a fun multi-climate ride all the way through the Moffet Tunnel over the continental divide. BTW… I love how the rivers run in one direction before the tunnel and the other way on the other side. 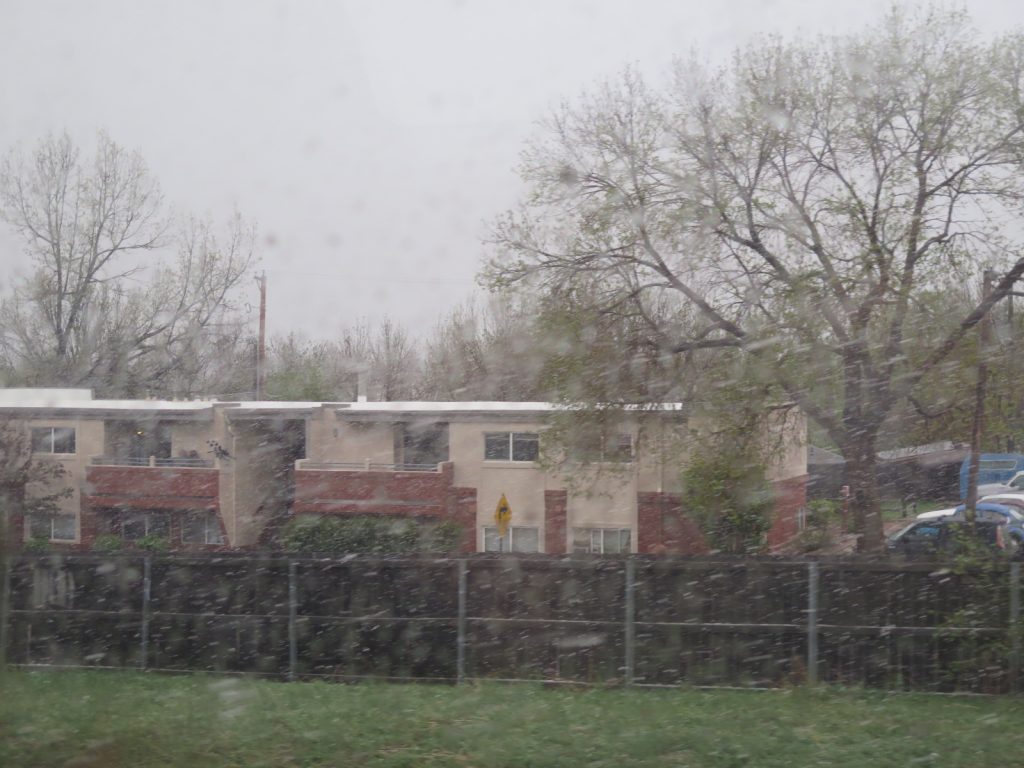 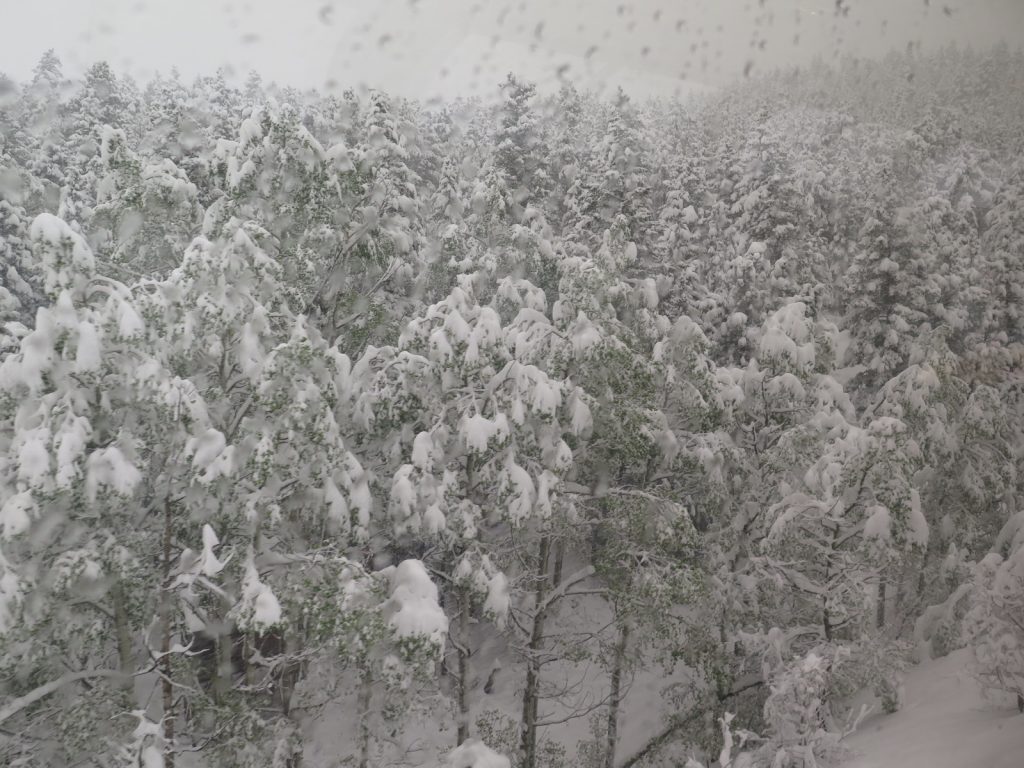 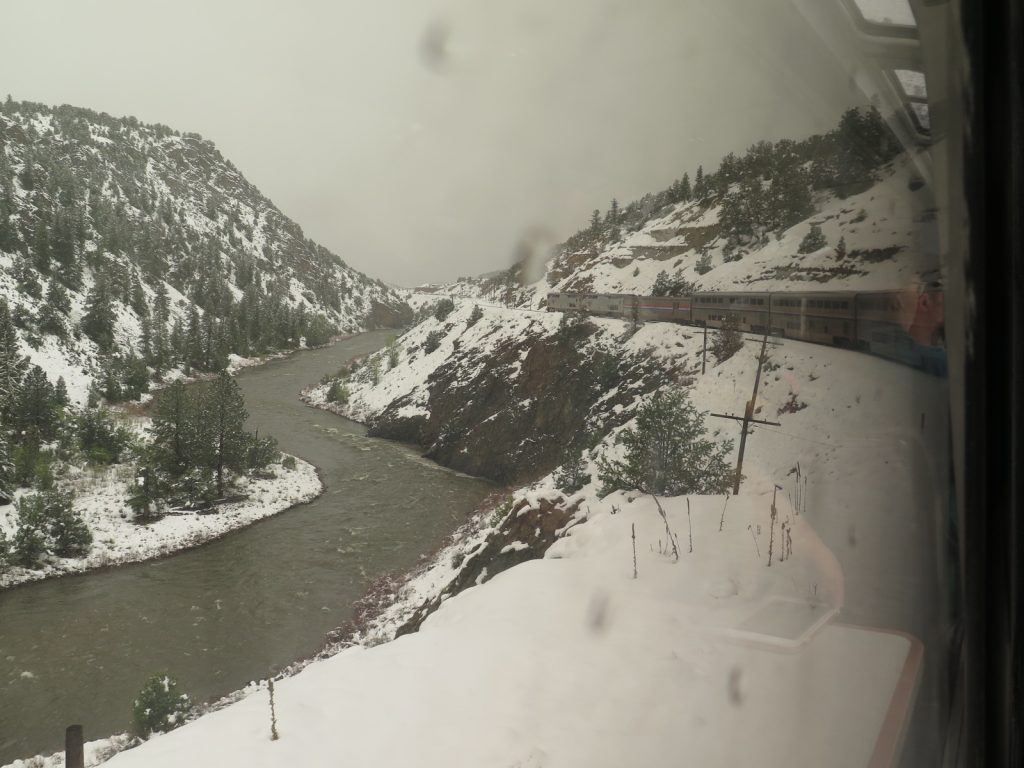 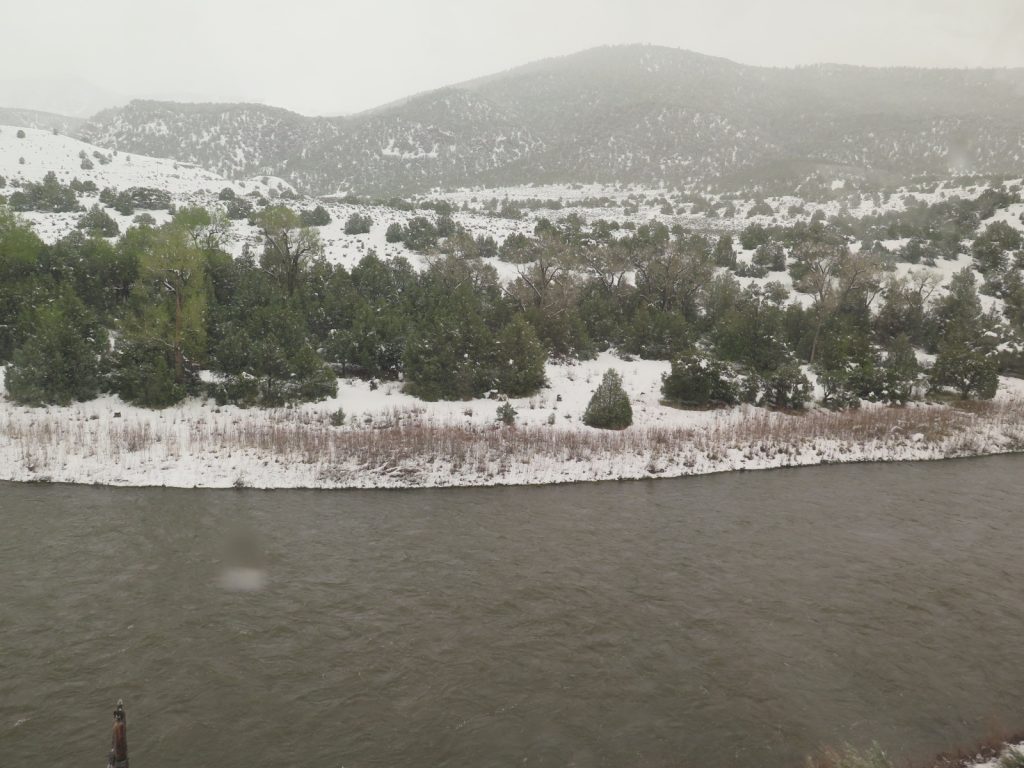 By the time we are close to the other end of Colorado the snow had let up. That night some of us who became a motly crew had a bit of an impromptu party in the sightseeing car. This is one of the perks of train travel… connecting with folk. In fact, all of the pictures on this post are of people I had conversations and laughed a lot with on this leg… more of that later. 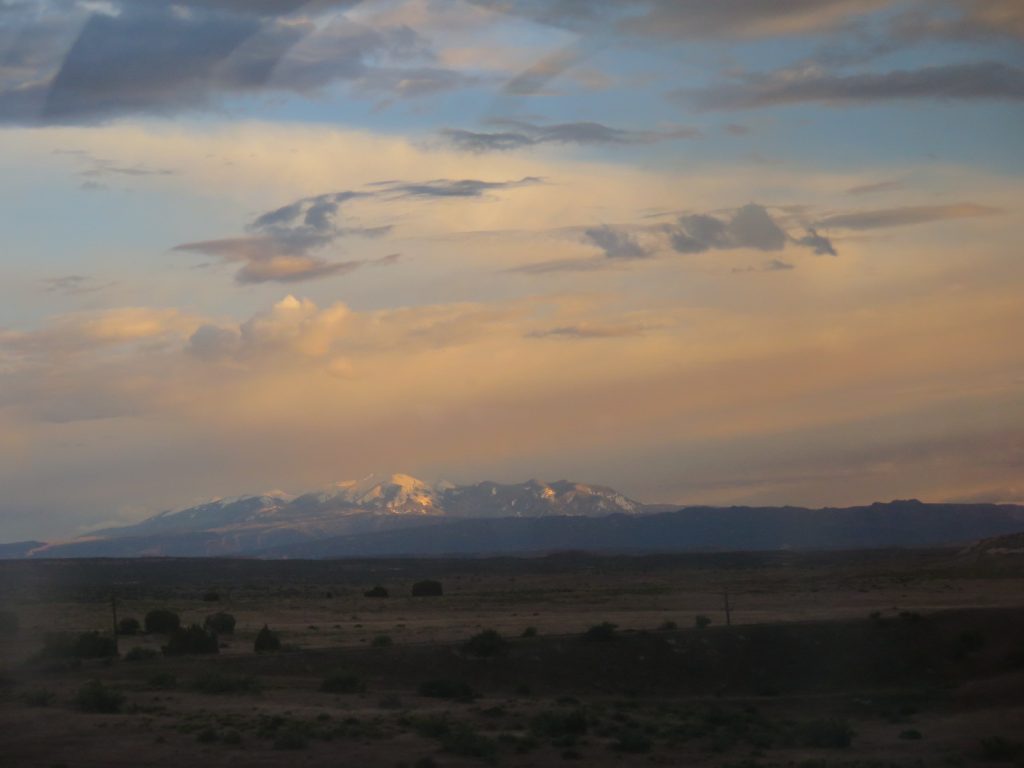 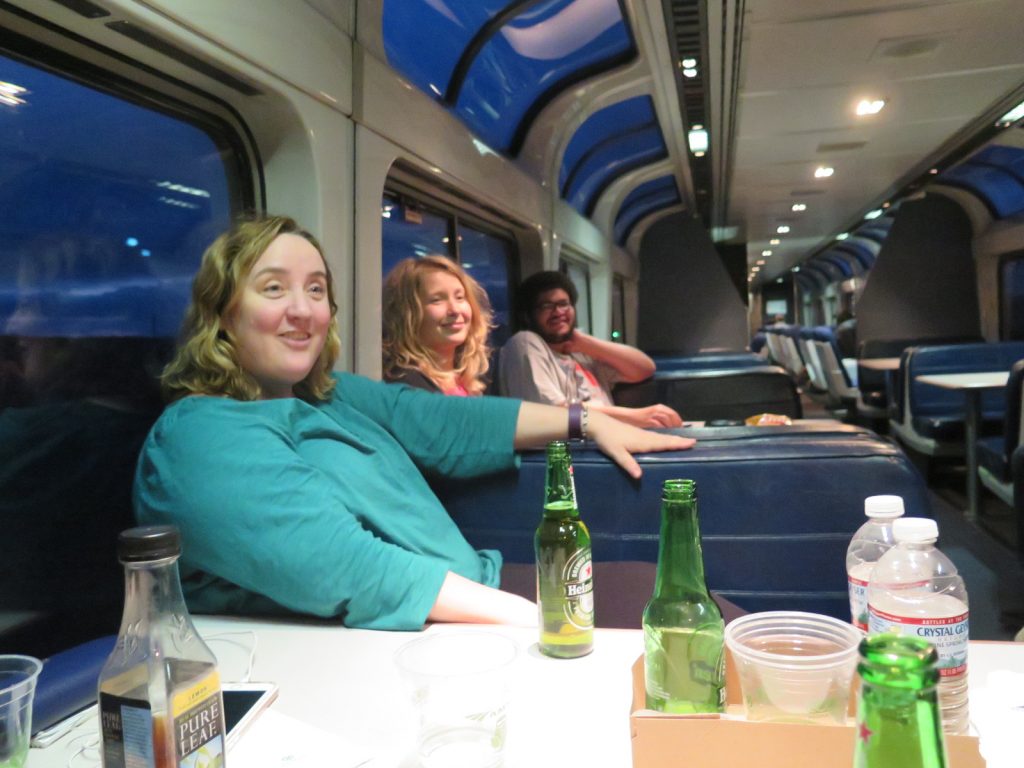 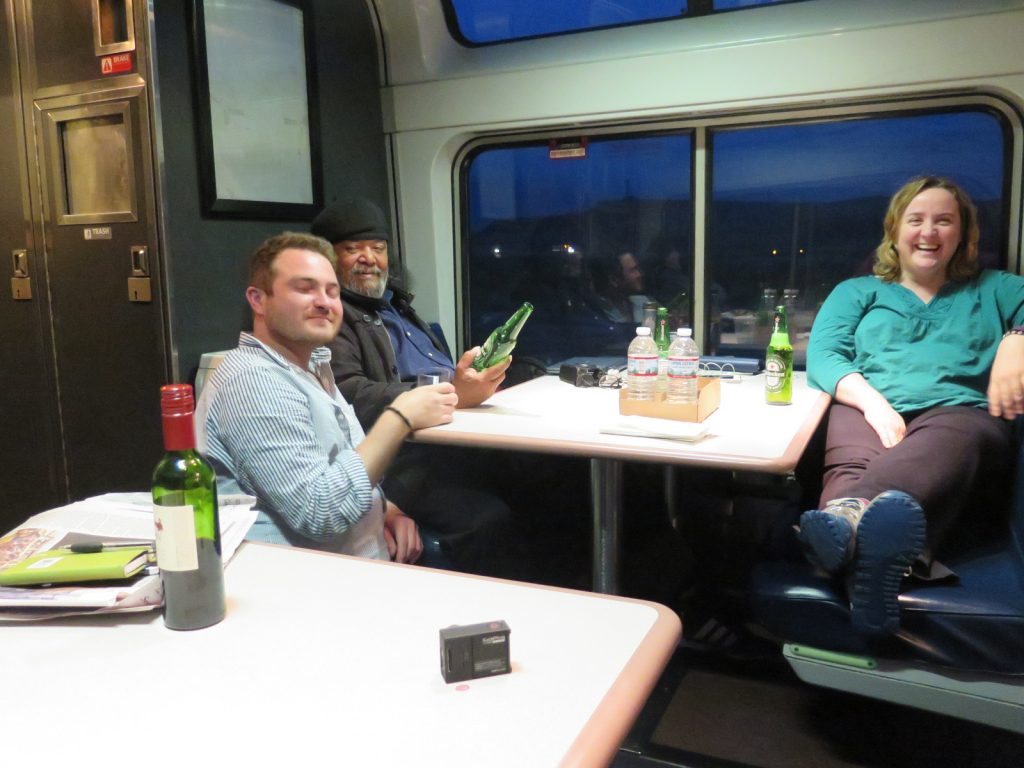 The train traveled through Utah for most of the night. In the morning, I woke to a glorious sunrise in the high desert. I wasn’t the only one to be mesmerized. It was technically 4:30 AM… there were only a few of us up but we all took it in silently with a sense of wonder. 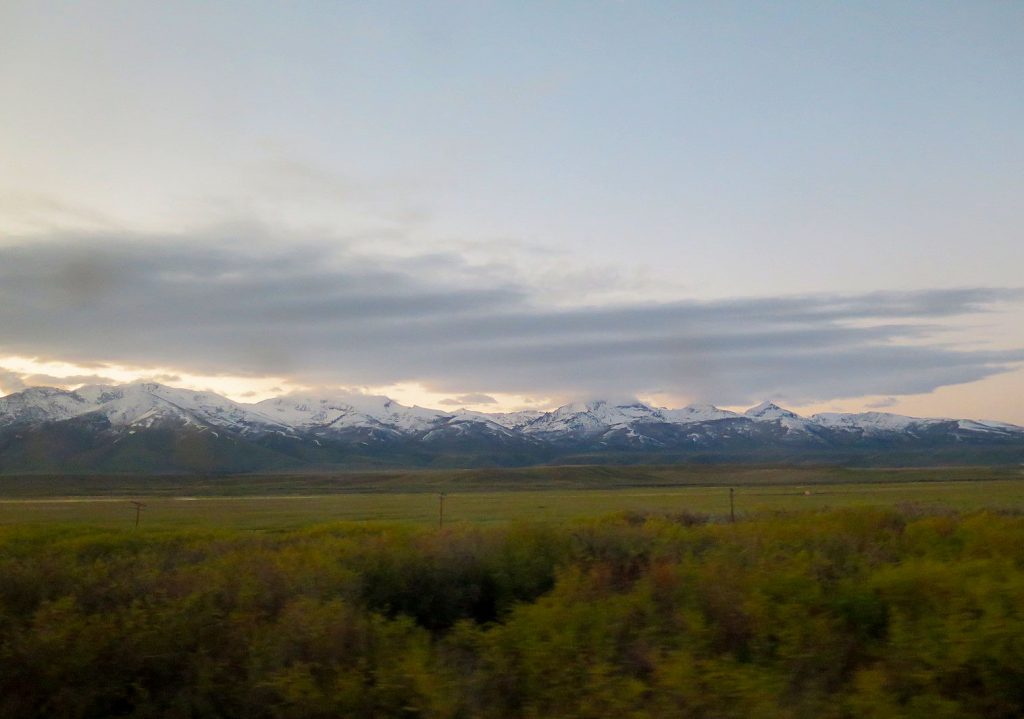 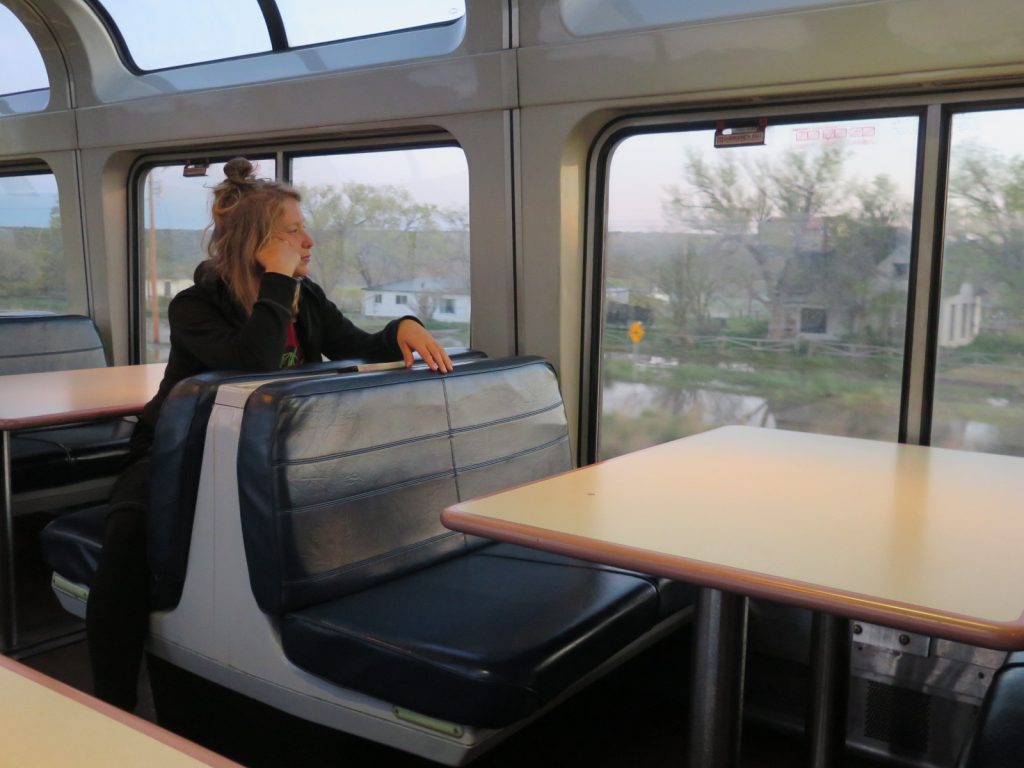 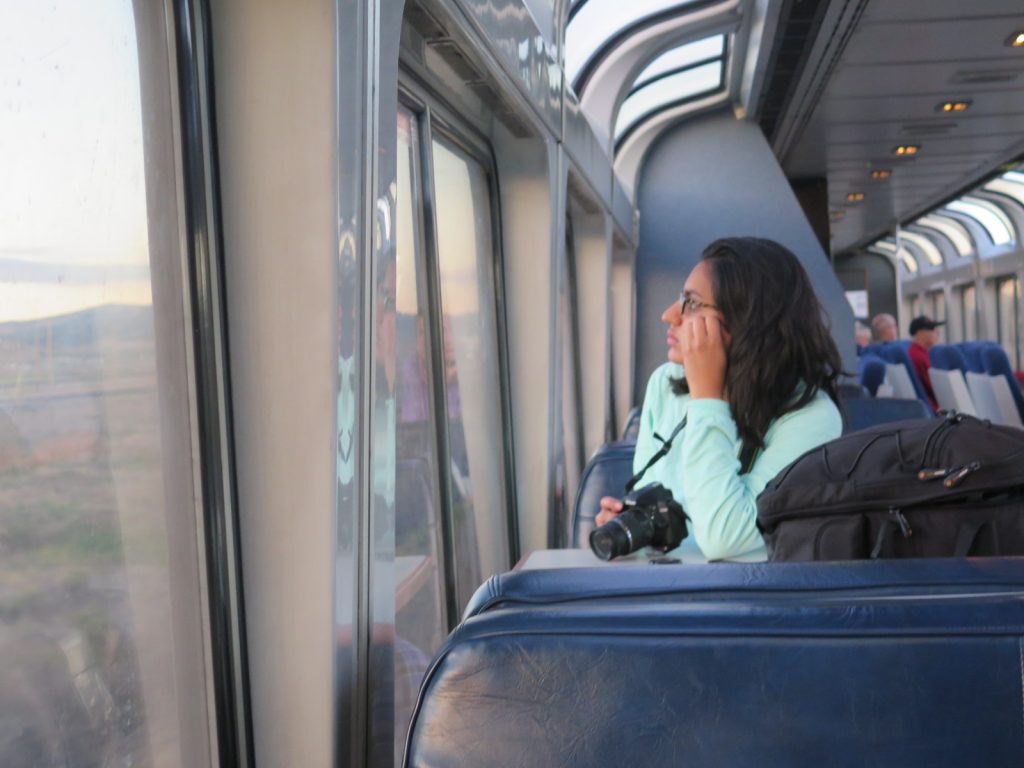 It was still pretty early when we passed through Elko, NV. From the far end of the coach I hear a gruff voice – seasoned by years of drink and smoke say,

“Ya know what Elko is known for? Dead hitchhikers. Yeah, in the 70’s a bunch of them were killed on the highway up there… because I guess, they didn’t look like normal folk… well, they looked like hippies. The cops dug up 16 or 17 of them all around this area. Yep, them were different times.”

That commentary was provided by a gentleman who had gotten on at Grand Junction – a self avowed gypsy who was on his way to work the pot farms in Northern California.

” It’s a good life. I go where I want… I’m out of the system… and when I get the need, I rent myself a wife for the weekend. It’s a good simple life I have.”

By the time we hit Winnemucca Nevada (say that 10 times really fast… and… yes, I hold it as a badge of honor that I’ve actually stopped there) it struck me that this was not quite the high desert I first passed through a month before. Apparently, in that time this area had experienced weather and everything was blooming… plus, dry gullys just a month ago were now filled with water – in the desert! You don’t see that every day. 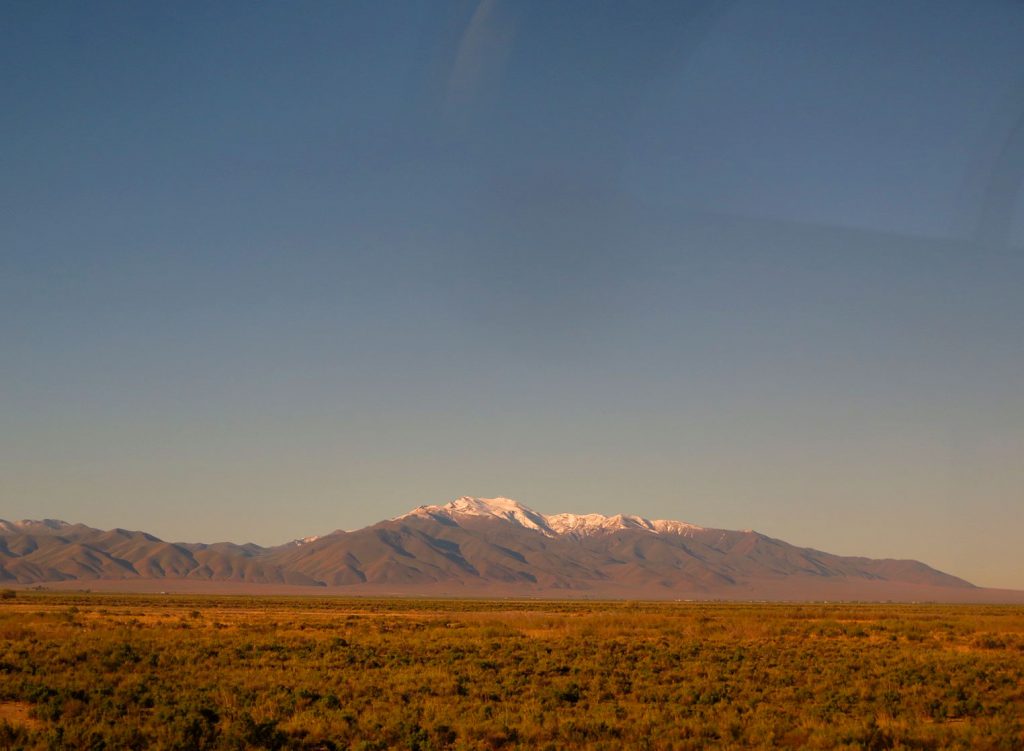 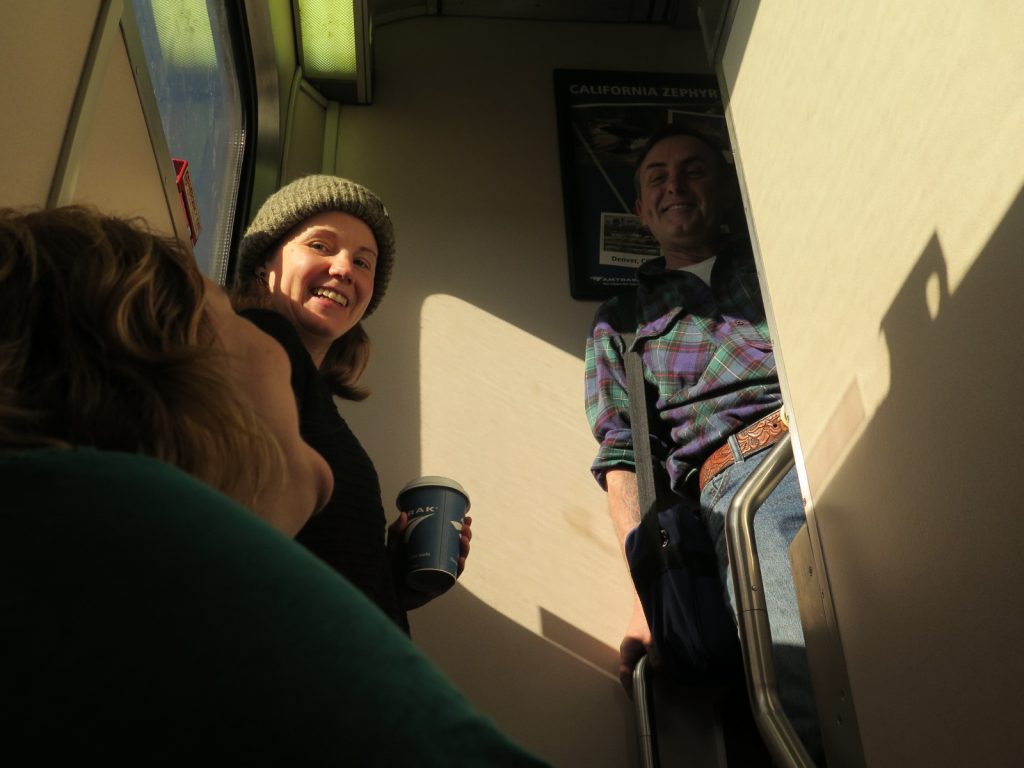 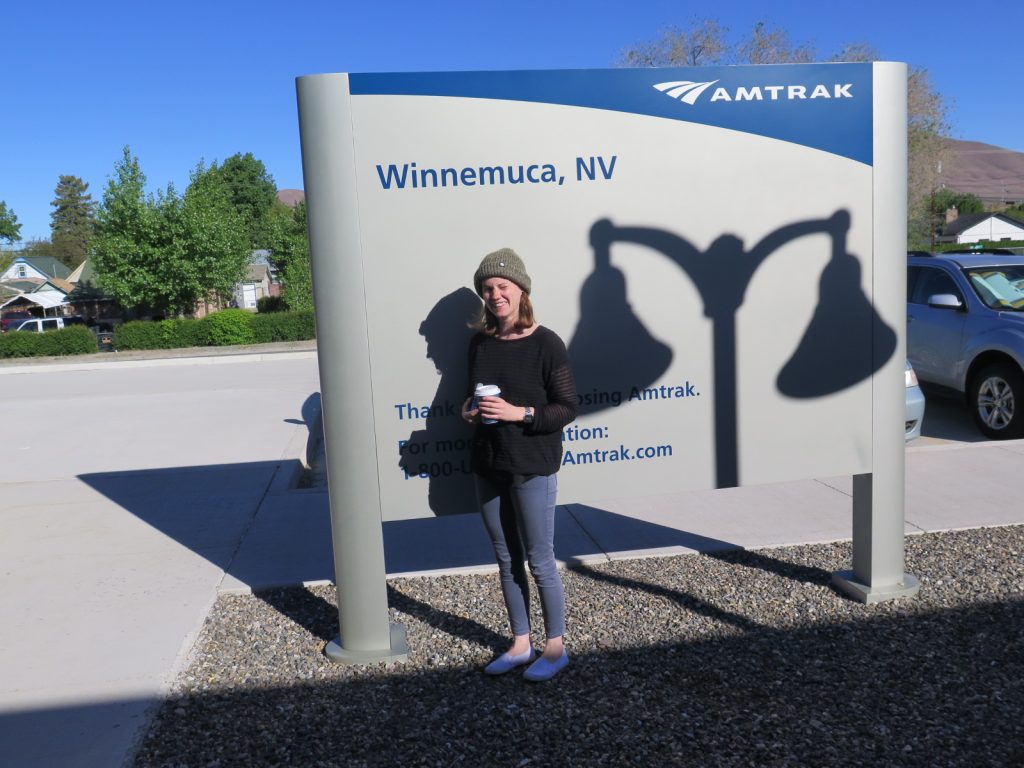 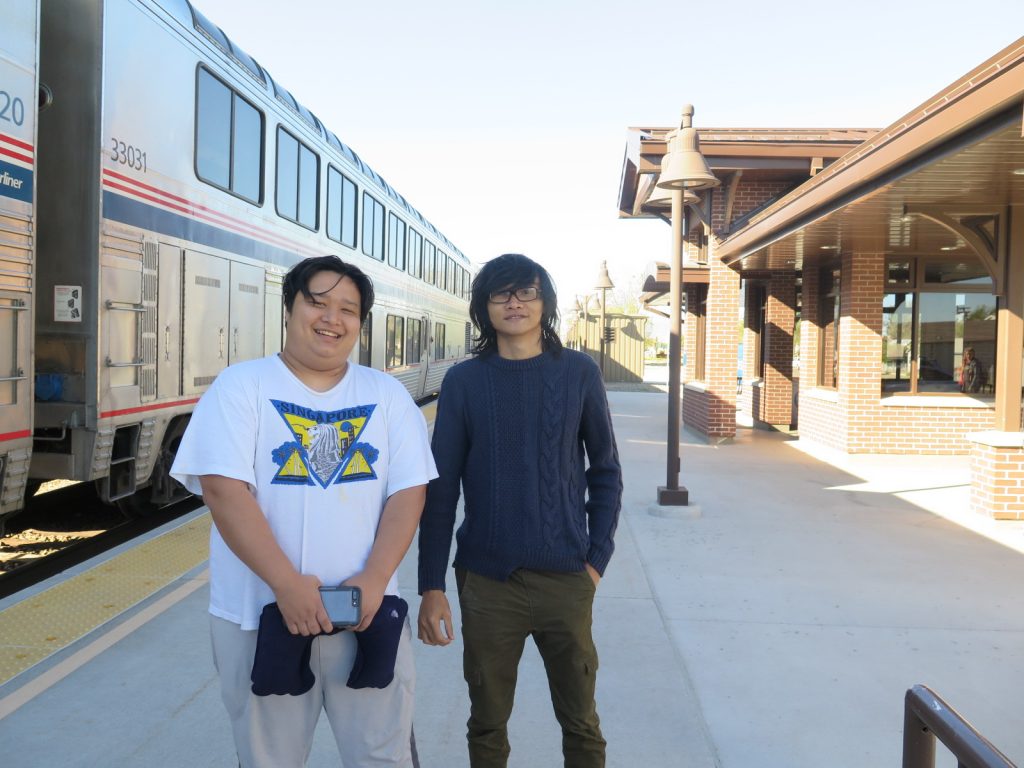 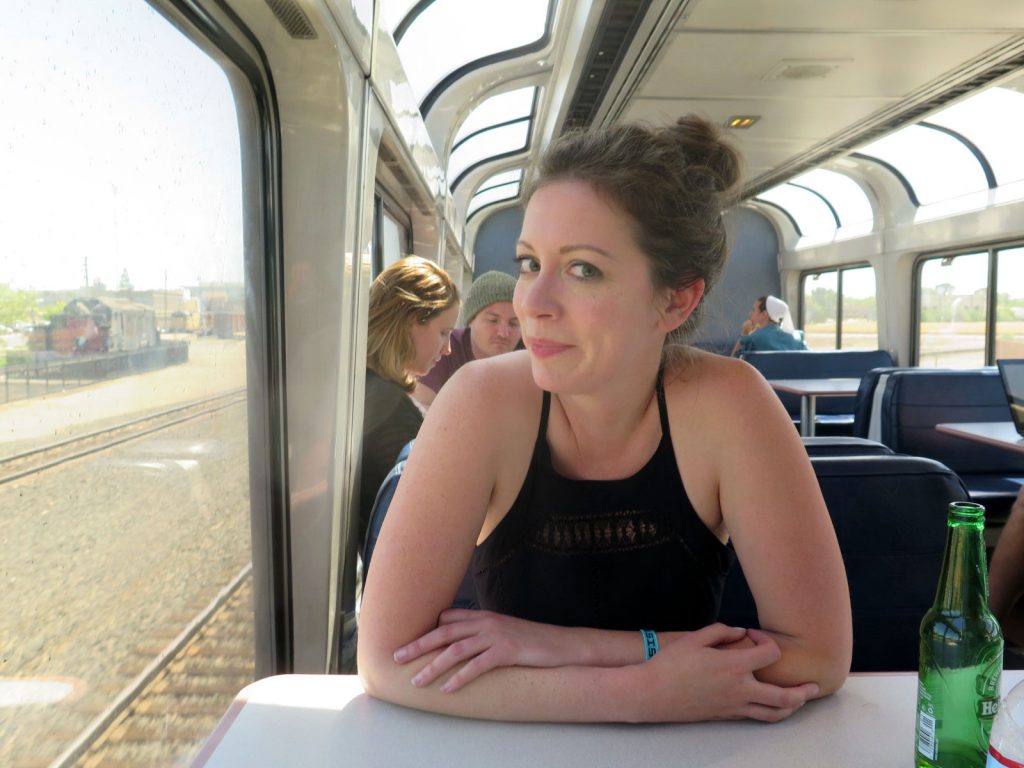 Past Reno we were climbing up the Sierras leaving the high desert behind. Once we left Truckee I was feeling a little melancholic that my time on this part of the adventure was coming to a close.  True, I had been to a lot of places in the last month… some were revisits but most were new to me. Ultimately it was the people I had met that really made it.

For instance, just on this leg there was the Indian family from Baltimore – mom, dad and 2 college aged daughters who were on their annual family trip. There was the Australian train driver on vacation riding the rails up in Canada and here as part of his vacation. The two Burmese students enjoying their last Summer vacation on the west coast before their final semester in college after which the hope to return to rebuild their country. The Finnish student who actively works with new migrants in her home country. The mother of two… a former theatre major who works with Native American Affairs in Omaha. The lawyer from Bristol who was on a whirlwind 2 week tour from East to West coast.

All these and so many more whom I’ve met, conversed and laughed with and I am so much richer for listening to their stories. Because we all have stories and this adventure was bejeweled by them. In all probability we shall never meet again. Sure, the motly crew on this ride were thick as thieves. There were promises to keep in touch but I doubt that will happen. But that’s OK because what we experienced on this ride will always be.

I got off the train in Sacramento and managed to connect with the San Joaquin for the final leg home. A friend asked me if at this point I was ready to get home or ride on he train some more. “Both”, I said without missing a beat… because whether I am traveling or just living life… the adventure continues.

After this, I will return to my regular blog to continue there. Hope you enjoyed following this adventure half as much as I did living it out.