From the time I was born until the age of 17 I lived in this house. The house was a “class 4” government quarters situated in the Kampung Pandan area of Kuala Lumpur. The ethnic make up of the neighborhood included Indians, Chinese, Malays and us Eurasians, the population make up of the country. As a result of this cultural mix I spoke 4 languages until I was the age of 9 or 10. Lost a couple of them due to lack of use… I still understand pretty well and can still cuss in all of them. 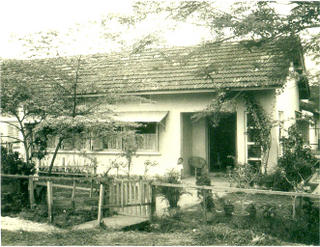 The old house was a modest semi-detached (duplex), 2 bedroom abode. When I say modest… I mean small. The entire area was built on old defunct tin mines. In fact, the city was founded on Tin. Being so close to old mining pools actually provided me with a Tom Sawyeresque childhood that included fishing, swimming and frog hunting. It also included celebrating each others festivals. 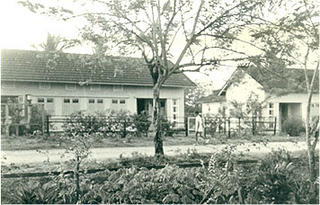 This was the view across the street. Behind that row of houses was a small expanse of secondary jungle foliage that separated us from the squatter village that was featured in a recent HNT posting. Being the highest ranking government employees living in the hood my father was addressed as “Tuan” and my mother as “Missy.” There use to be a cattle farm not too far away. Twice a week cows would be walked on this road to and from grass fields. They would drop their dung on the road. This was called “gold” by the neighbors who would wait for a day or two for it to dry and…presto… free fertilizer! 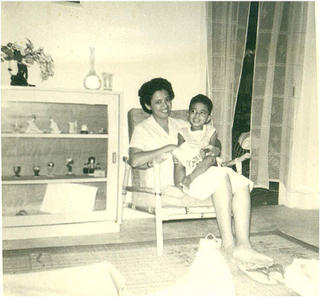 This was what the living room looked like. I remember in the late 60’s my parents bought the first TV set. Word spread fast and soon this little living room was filled nightly with neighbors sharing a communal TV experience. They were usually polite enough to stay for 1 or 2 episodes of “Combat” or ” Have Gun Will Travel” and the living room would be ours again by 8 PM. That’s a pic of Mum and me in the pre-TV days. 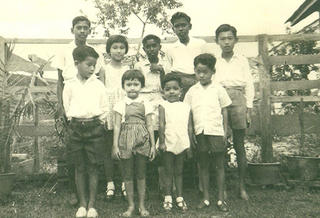 This a a pic of some of the neighborhood kids and a couple of cousins in our front yard. I (second from the right bottom row) grew up with these guys. We ate together, played together, hunted frogs and all manner critters together and fished together. My best friend was Subramanium (top left) who was a mute. Everyone called him “Tambi” which translates to “boy.” 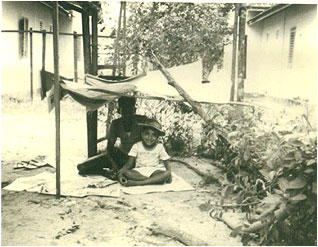 He wasn’t really a mute. Due to a childhood illness, some kind of nervous short circuit caused his tongue to be pulled to the left hampering any sort of proper speech. Because we grew up together we developed our own language. Only his mother and I knew what he was saying. He would take me on his bike (before I learned to ride) and we would get into all sorts of adventures. We even camped on the side of the house once… stayed there all night too. 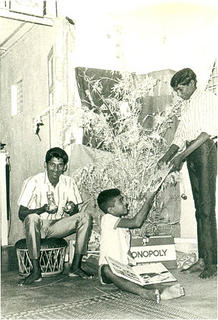 Due to his condition he could not go to school. I taught him to read a little but I ended up writing all his “love letters” for him to the various girls he fancied. This of course was when we were a little older and at that “girl chasing age.” In this pic Tambi is on the left and Ganeshen is on the right celebrating Christmas with us. Tambi and I had a falling out when I was 16. We never spoke to each other again. (There is really no pun here because we really did speak to each other.) I’ve heard through the grapevine that he is married with 6 children. (Evidently, he did a lot better without the love letters I wrote for him.) I hope he is well.