It’s been a while since I’ve done an HNT. But I thought this was significant simply because I met a fellow blogger from across the continent in San Francisco on Sunday. And why (may you ask) is this significant as an HNT? Because it is through (the earlier days of) HNT that we came to know of each other.

Over the years of visiting each others blogs, commenting, and exchanging the odd email this is the first time that we met face to face. Mark (Leslie) and I had arranged to meet outside the Powell Street BART station in San Francisco on Sunday. He was attending a conference in the city and when I found out it gave me a great excuse to hop on the Amtrak to get away from the Big NO for a bit.

As we walked up Powell Street to the clanging of the cable-cars I pointed out “John’s Grill”  – a known (and famous) hangout of Dashiell Hammett… we quickly decided to share a meal there. (Seafood cannelloni BTW.) It seemed apropos since he is a novelist and me an (off and on) playwright. (Also, Mark was staying at a hotel on California Street… not too far away from where the character of Sam Spade’s office was in Hammett’s books… or at least the movie. Coincidence?)

That sealed the deal and the rest of the evening (after dinner – which was delicious) was spent engaged in great conversation as we hopped bars in the area. In fact, we closed down the last one we were at where we sat on the sidewalk sipping our beverages of choice as a great local jazz band was playing inside… while we engaged in a session of “local, transplant or tourist”. 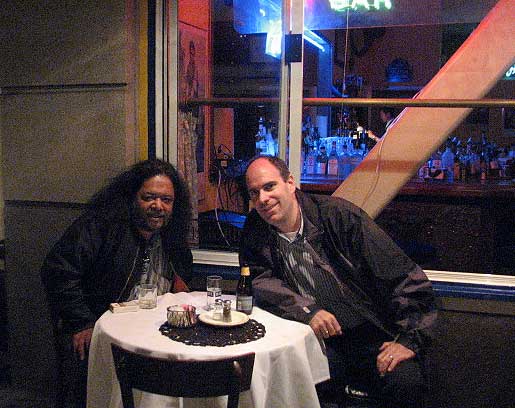 It was very soon after we met that my suspicions were confirmed… Mark is as genuine and as nice (and even more so) as his blog persona is. The conversation flowed easily throughout the evening… as did the drinks. It wasn’t dominated by nerdy writer shop talk (the entire time) but spanned various topics including HNT.(Yeah, we talked about a lot of you.)

Meeting Mark was just the refreshing tonic the doctor had ordered. It was a privilege getting to know him better and my hope is that this is not the only time we meet. So, Thank You, Mark. (Yeah, he kinda looks a bit like James Taylor in that top picture, huh?) And yes, thank you Osbasso because without HNT I would have been denied this wonderful opportunity to meet and spend time (and several drinks) with this stellar and talented individual.

Click the banner below to find out more about HNT.