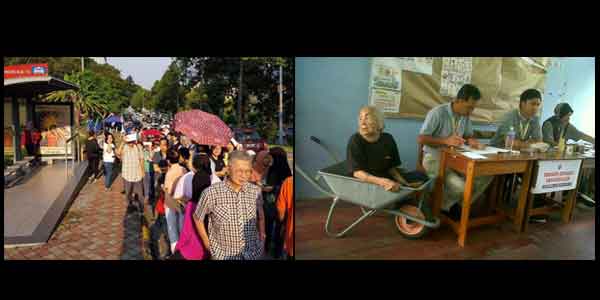 May the 9th was already significant to me. On that date when I was 12… my Dad passed away. On that date this year, Malaysians went to the polls in the 14th general elections resulting in a momentous shift… one that ousted the ruling coalition that had been in place for the last 61 years. A ruling coalition whose time had come… bloated from the rot within.

Social media is still being filled with Malaysians rhapsodizing about what happened… and so they should.  It is indeed a seismic change. To be frank… I’m still digesting all of this. I held off writing anything (at least of any substance) until today.

Growing up, it was prevalent that my parents’ generation held a palpable (and perhaps idealistic) idea of Malaysia… or at least what it could become. They were the generation that weathered everything the first half of the 20th century had thrown at them and ushered in independence from colonial British rule. A large percentage, like my parents, joined the civil service. Apart from job security there also existed a distinct feeling that they were contributing to the creation of a new nation.

I grew up in that era. That was part of my consciousness to the point where it was taken for granted. I also lived in a mixed neighborhood where the respect of race and religion was the norm. I was a first generation born Malaysian who didn’t know any different. Things were going fine until the scar of the political race riots of May 13, 1969, occurred. From that point on, a slow and insidious shift began creeping in and started eroding at “the idea of Malaysia”.

Part of that had to do with setting up a “ruling race and religion”. The merits or folly of which can be argued until we are all blue in the face… especially considering the mixed (and rich) cultural makeup of the population. What it ostensibly created was a “second-class citizenry” among the others who did not belong to the privileged class. When asked about it, my Dad would simply say, “That just means that we (the others) would just have to work harder… that will make us become better.”

By the time I left for university education at the age of 21, I could see the writing on the wall of what could lay ahead if that trend continued. Bit by bit rights was being siphoned off in the name of “national security” and nary a word was said so as not to rock the boat of this young developing .nation. Sure, there was grumbling but the conventional wisdom was that this was still a growing nation. Plus, the blessing and curse of Malaysia is that most of the population was comfortable… so why make waves, eh? And those who had had enough and didn’t see any change possible in their lifetime… emigrated to lands where their children could get a fairer shake of things.

Even with that, I was still set to return after completion of my studies to perhaps contribute in maybe helping to veer away from that possible ugliness. I thought (rather idealistically) then, that my generation of “firstborn Malaysians” could make all the difference needed. Afterall, we all grew up with the taste of “the idea of Malaysia.” But my life took a different turn… and so did the land of my birth.

Even though I was away I still kept tabs on with what was happening. And what was happening was not pretty. When friends would ask me about the form of government Malaysia had I would reply with… a constitutional monarchy with a “guided democracy”.

Fast forward to 2007 when the first Bersih rally took place. I was delightfully surprised and impressed that a good percentage of the population had had enough and took to the streets peacefully to demand change. As much as I was moved by the “people power” on show, the cynical part of me was convinced that this was a “one-time thing” that would be quashed by the ever-increasing authoritarian rule in the country.

But the movement for free and fair election persisted and grew. The population decided they deserved better. They began to understand the price of democracy was vigilance and engagement. Many put aside differences and reignited the original “idea of Malaysia”.

They’ve persisted for the last 10 years… and on Wednesday they took to the streets again… this time to vote… and finally achieved full democracy.

It is indeed a new day in Malaysia. I am proud of their patience, persistence and peaceful means by which they achieved this momentous shift. So, is this a miracle? It is… at least the miracle of people who came to the realization that working together made them strong enough to achieve what was once thought impossible. And they did it in spite of the hurdles that were thrown in their way.

But now is when the hard work begins. There is a huge mess to clean up and certain nefarious aspects of the culture to be cast aside. As long as they hold on to vigilance and engagement (something that many older established democracies might want to revisit) I am sure they can make things better… much, much better… and continue growing this new democracy.