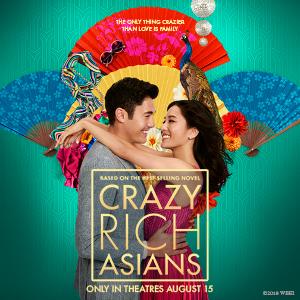 Crazy Rich Asians… yeah, I watched it this afternoon… in the cinema at that! (Doesn’t happen very often.) Here is my review.

First off, ‘Crazy Rich Asians’ is a fun movie that is targeted towards a mainstream audience. So, pretty much a light rom-com that anyone can enjoy with plot lines that are familiar to that genre. Think ‘Cinderella’, ‘Pretty Woman’ and ‘Four Weddings and a Funeral’ served up with a healthy stack of dim sum.

Cultural elements are served lightly enough to be relatable across the board. Not unlike ‘Shakespeare in Love’, a general audience can enjoy it but there are sprinkles providing an extra knowing wink if one knows the culture… sort of cultural easter eggs.

I thought everyone performed their parts well. Constance Wu’s character is lovable and kudos to Henry Golding for pulling it off on his first time out. Awkwafina and Nico Santos are scene-stealers and both Gemma Chan and Michelle Yeoh provide some sublime moments.

From a personal standpoint it was fun spotting some faces that I know and a couple I’m related to. (Yeah, really.) That was a fun surprise. It was also fun spotting locations and giggling at those cultural easter eggs mentioned above.

I do have some small quibbles though. The biggest one (and it is cultural) being the lack of other Southeast Asian faces in the film. Mainly because Singapore (like Malaysia) is culturally diverse. Yet, apart from a couple of Sikh security guards almost everyone is of Chinese heritage in the film.

One would think the wedding guests could have included some Indian and Malay faces. This, I felt was a little disingenuous (and ironic) considering what a big deal has been made in most of the press junkets touting the need for better representation in the industry. Afterall, the story is set in Singapore… and if it is… it should reflect the society there.